Of course I’m disappointed in the way Serena lost Saturday’s match against Kim Clijsters, but unfortunately, I can relate all too well to a lost temper in the heat of the moment and the subsequent self-recrimination. I imagine her self-recrimination is magnified by the number of people who watched the incident live or on video later. She must be promising herself that it will never happen again, and it certainly won’t any time soon.

For the purpose of my blog, however, I’m actually more disappointed in the sports bra she wears. I found the answer to my question last Friday in an interview with Stylebakeryteen:

SBT: And what about sports bras? Everyone’s always looking for that perfect sports bra. What’s so great about these from Nike?

SW: There’s a lot of extra support and give so even someone like me can wear this kind of sports bra. And also the tops have built in sports bras so if you wear a sports bra and the top, you actually get double the support.

Nike? Is she kidding? What full-breasted woman has ever been recommended a Nike sports bra? Unlike her angry outburst, Serena has obviously had time to make a cool-headed decision on this one, and who wouldn’t be tempted by Nike’s sponsorship money? The companies that produce excellent sports bras for us can’t compete with Nike’s marketing budget (yet), but it’s really too bad. Imagine the service she could provide to the younger generation of full-breasted athletes if she were to be candid on this point.

Perhaps she doesn’t know any better. After all, Nike has likely been customizing her clothing for years now. If so, let’s hope they made whatever changes were necessary after the Sony Ericsson Open last March. 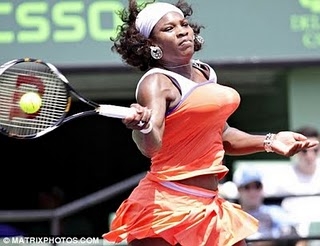