I mentioned yesterday that I was heading to the garden to weed. Besides the smell of dirt and the sound of birds, I love seeing progress from my work. Sometimes I just compare the finished and unfinished halves of the garden with each other, but yesterday I decided to take before and after photos. Here’s the Before Picture at noon. The After Picture at twilight is after the jump. 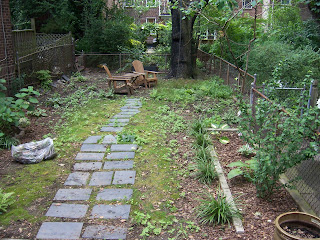 I would love to have some before and after pictures of my shirts to show you, but the “after” isn’t quite what I want it to be yet. I tried the shirt on two women last Friday. The shoulders and style looked great on both women, but one woman had major gapping in all three sizes she tried. I’m hoping it was the bra, which I don’t think fit her properly. It turns out that I’m going to need to become a bra-fitting expert!

The other woman had the opposite problem. She swam in the smallest shirt, which means I need to offer a size 2 and definitely need to go down in cup size for her. You live and learn, albeit slowly in this case–which is why it’s great to have a garden where I can accomplish something in just an afternoon! 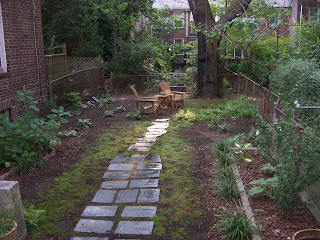