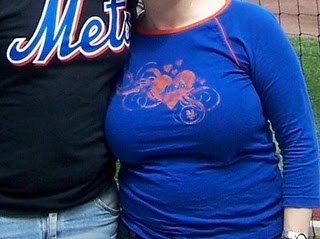 Okay, so this tee shirt is actually a cross between a crew neck and an almost boat neck (or “bateau”), but you get the point. I love this shirt because Mr. Campbell chose it for me, but you can see why I never would have bought it for myself.

Boat necks parallel our bust lines, which is the equivalent of underlining and bolding them. If that’s what you want to do, then a boat neck is perfect. I’m pretty sure Mr. Campbell loves that about this shirt on me. However, our breasts usually draw enough attention to themselves without the assistance of a neckline that especially flatters small-busted women (it’s also called the “Sabrina Neck” for a reason) and gives the illusion of larger breasts. Boat necks are also bad for the same reason that crew necks and turtlenecks are bad–too much fabric. I love this quote from a blogger in Australia that I’m going to start following:

“Turtlenecks are a no-no. Youâ€™ll look like you swallowed a couple of melons. Also avoid slash neck or boat neck tops. In fact just avoid anything with a high neck line. It will not flatter you.”

Speaking of not flattering, I dropped by a Cole-Haan shoe store yesterday and encountered three saleswomen wearing gappy button-down shirts. These women had perfect figures, so of course they didn’t want to hide them under baggy shirts, but it was impossible to appreciate the fit at their backs and shoulders when the drama of their breasts wanting to be free was playing out at eye level. I so wanted to take a picture to post here, but how could I go up to them and say, “May I take a picture of your breasts to show my readers what not to wear?” I tried to take a stealth photo, but it was just too difficult in a shoe store by myself. Some day I’ll travel the city with a friend, pretending to take pictures of each other when we’re really collecting data for a gap-o-meter posting on this blog.

As far as tops go, I discovered one more bra top option last week when I met Jordan, the founder and designer of Doce Vida Fitness Wear. I haven’t yet tried Doce Vida tops, and they look like they’re primarily for workouts, but I like that their L and XL are meant for D cups and higher and that they specify what a C cup or higher woman should pair with them for maximum support. I also liked the solid feel of the fabric, which Jordan told me is just as comfortable in the summer as it is in cooler weather. If you decide to try them out, use this 20% coupon code that’s valid until June 1: rocktheworld.

Jordan is obviously a fitness wear expert, so I also asked how long a sports bra should last. It turns out that if you wash them after every wearing like Jordan does, they can last a few years. Since I only wash mine once a week or so, I wonder how long it’s been since they’ve expired?