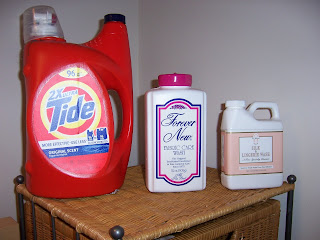 Someday Iâ€™d like to conduct a survey of how my readers wash their bras. Personally, Iâ€™m a put-it-off-as-long-as-I-can washer. Once when Ralphâ€™s mother at Orchard Corset was fitting me, she suggested the lazy approach: wash it while youâ€™re wearing it in the shower. I havenâ€™t tried it yet, but it seemed like a good idea. Usually I alternate between soaking my bras in laundry detergent in the sink and putting them in a lingerie bag in the washing machine.

Now, however, I am going to try Real Lingerie Washing Stuff. The cashiers at the lingerie stores swear by the Stuff, and Iâ€™ve always wondered whether itâ€™s simply a marketing add-on to my bill, or if it would really make a difference. Now itâ€™s time to find out.

Letâ€™s see if careful washing will make Bra 2 and Bra 3 last longer than Bra 1, or if they each need to be replaced at the same time. Speaking of replacements, Iâ€™ve heard anywhere from 6-12 months. This last time, I realized it was replacement time when the seamstress making alterations on my bridesmaid dress suggested I take in some fabric at the shoulders in order to give me some â€œliftâ€.