It’s no secret that my favorite online bra and bikini retailer is Figleaves.com. But I don’t think I’ve ever written about their house brand bras and bikinis, a number of which I’ve tried over the years. So this week I’m focusing on three bras that I currently own and are all still available, the Midnight Grace Pin Up E+ Non Padded Bra, Midnight Grace Paige Italian Lace DD+ Balconette Bra, and newcomer Lulu Tout Amelie Underwired Bra.

First up is the Pin Up bra. For the love of God, please ignore the abominable fit on the Figleaves model. Though to be fair, this is how the bra” fit” me the first time I tried it. When I ordered this, it had been so long since my last Figleaves house brand bra that I didn’t remember how they fit. So I went with a 30FF since they don’t come in my usual 28 band. 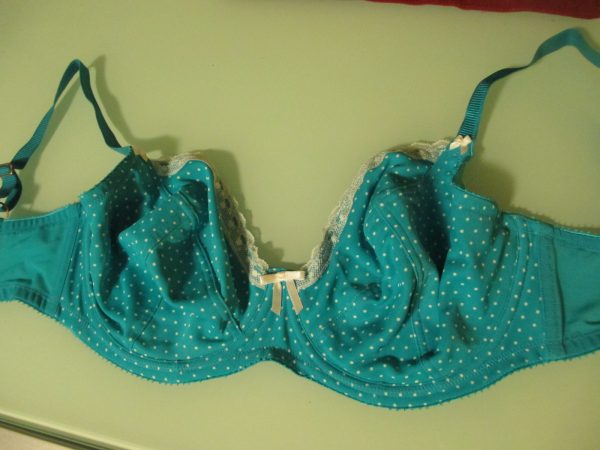 I quickly remembered that they run very tight in the band and rather small in the cups. The band on this was so tight that I literally could not close it. It wouldn’t have mattered if it closed, though, because the cups were so teeny tiny that there was no hope of placing my breasts in them. At the time, I even thought maybe it had been marked incorrectly. I don’t know what was going on with this bra, but I was pretty unhappy about the nonsense sizing.

A few months later, though, and the bra went on clearance for $9.90 (and it still is!). Well at that price, I just had to try again. My teal obsession must be indulged! So this time I tried a 32FF (one cup size up) and a 32G (two cup sizes up).

This time the band fit like a slightly tight 30. So it’s do-able for me, but it’s a little looser than I would really prefer, especially since it’s very stretchy. I had a hard time deciding between the FF and the G. Both looked so similar in the mirror! But ultimately I went with the 32G because my boobs tend to settle into quad-boob throughout the day, rarely when I first put a bra on, and the bra was cutting into my bigger side just the tiniest bit. So in the end I had to go up two bands and two cups.

Now as for how this nutty 32G fits, it’s okay. Honestly, it’s about what I would expect for under $10. The fabric is very stretchy and comfy in both the band and the cups. But the profile is a little east-west and a little pointy. The cups are your usual three-part construction with mesh lining on the bottom half. The band is a single layer of mesh. The straps have a great horizontal texture. 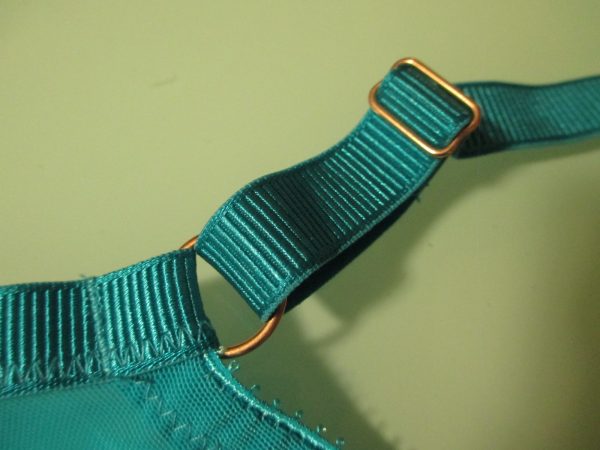 The wires are shaped bizarrely. In the gore, they swoop upwards at a sharp angle, but on the sides they go out at a much wider angle and end up being reeeeeeally wide. I’m talking, you can see the wire wrapping around to my back when my arm is down at my side. Underwires should not be visible when my arm is pressed to my side! 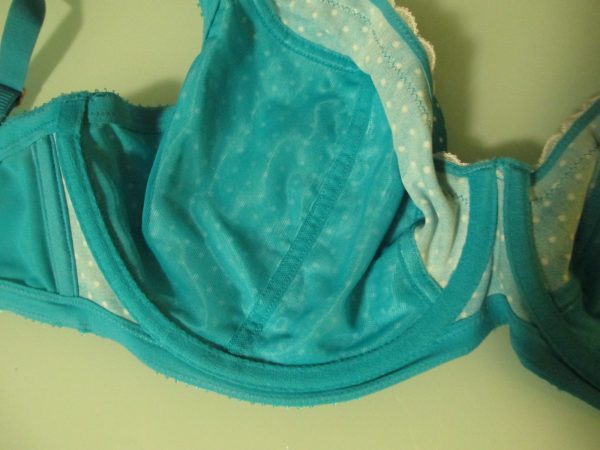 But overall the bra is super comfortable and it still manages to give pretty good support, so it’s a keeper. It’s certainly an outlier, though, as the next two bras (and the bikini I tried last year but ultimately returned and didn’t write about) fit much more consistently.

Next we have the Paige bra. I actually picked this one up at the Busty Swap/Sell in October. It fits much closer to how it should. I’ve got it in a 30G, so one band up and one cup up. 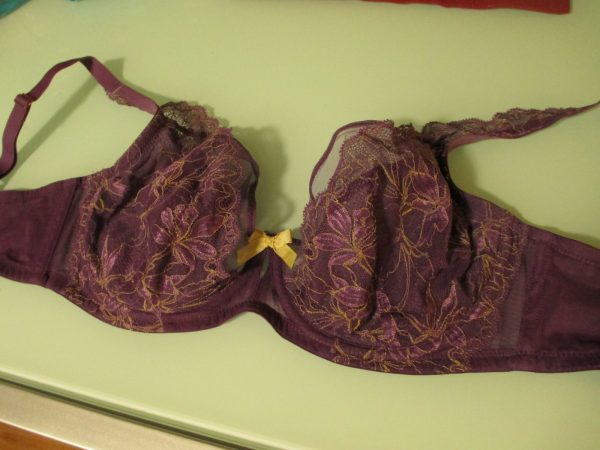 The detailing is really lovely: the keyhole in the gore, the metallic-like embroidery, matching gold bow in the gore, and the lace that continues up the straps all make it feel much more luxe than its $38 price tag. 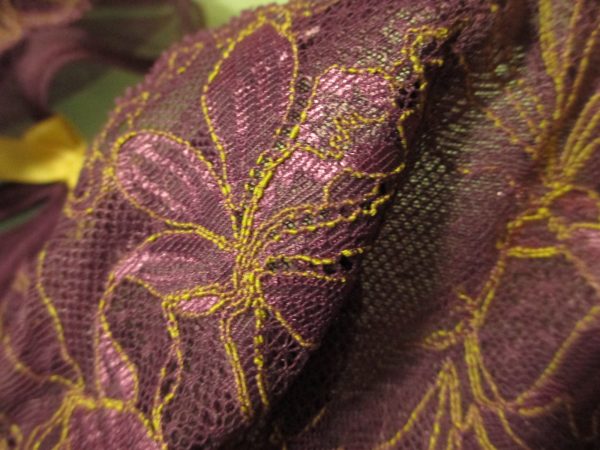 This one is another standard three-part construction. The bottom half is double mesh and the top piece is a single mesh layer. The embroidery is actually a totally separate piece of fabric that’s only tacked in place with one stitch. As such, it doesn’t lay perfectly flat against the cup. It’s a small price to pay for such a lovely, delicate look, though. 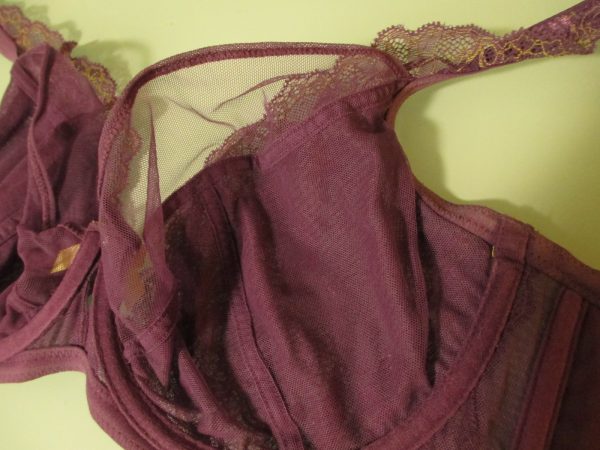 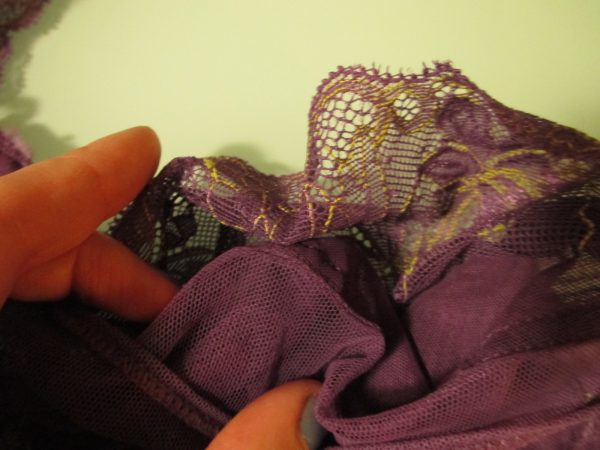 This time the band is a double layer of mesh. It also has what I consider a much more standard wire shape, with an even level of swooping on both the inside and outside of the wires. 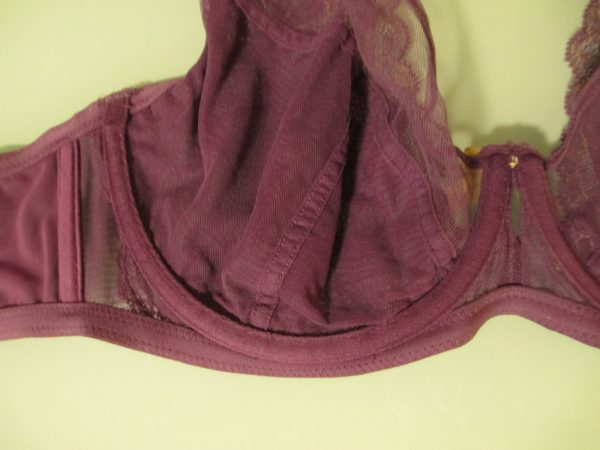 As for fit, it gives an exceedingly round profile. My boobs are like two perfect orbs, much like the Figleaves model. It doesn’t give that much lift, though, so while my boobs are very round, they’re also a bit low. Wire width and depth seem pretty average, and it’s perfectly comfortable overall.

Finally, we come to my favorite of the three: The incomparably beautiful Lulu Tout Amelie, in 30G again. 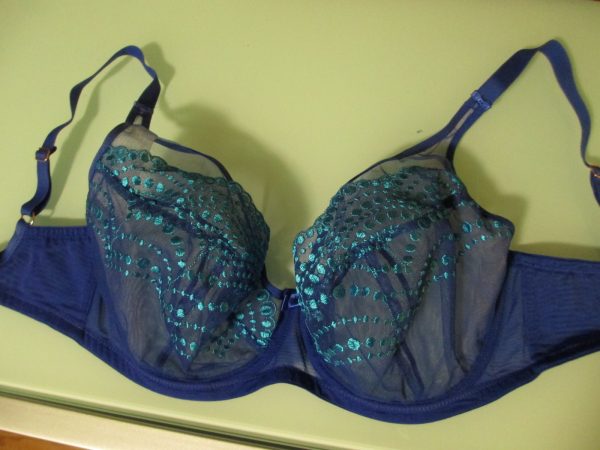 This blue beauty is a total mermaid bra! My photos do not do it justice. The blue is so vibrant and the turquoise embroidery is so shiny and bright that it looks like fish scales. 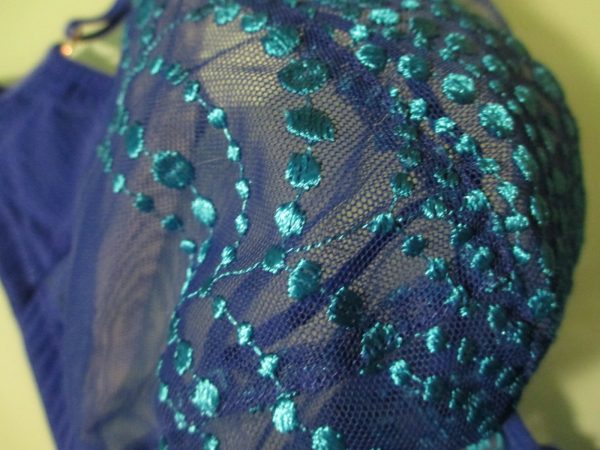 This bra is quite delicate, with a three-part construction of very sheer single-layer mesh. The band is a double-layer of mesh. 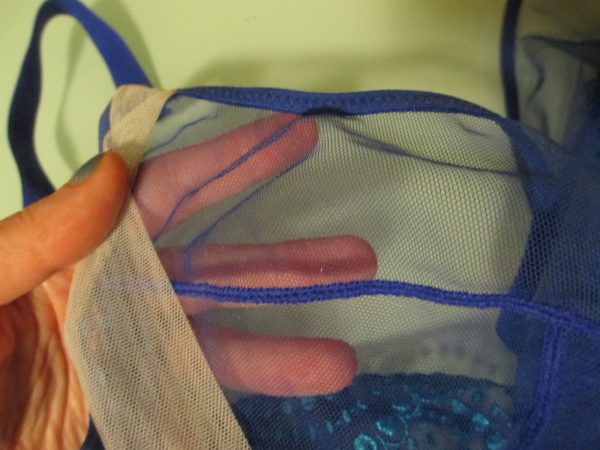 Again the embroidery is a separate piece of fabric, this time not tacked in place at all, though it seems to lay flatter than the Paige. 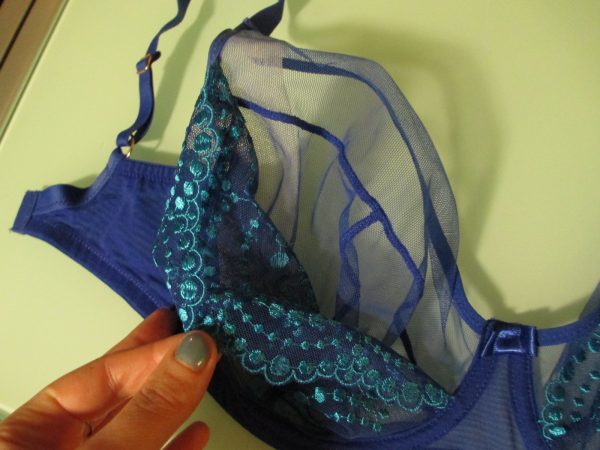 Since it’s just one layer of mesh, there’s also a hidden double-mesh side sling for extra support. It’s a dark ivory that completely disappears against my skin. 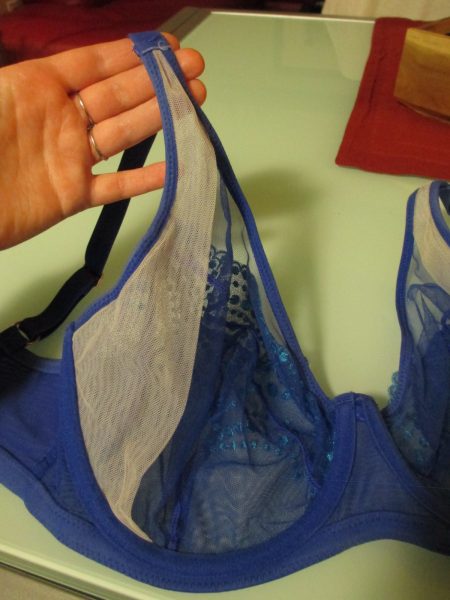 The width and depth again seem average, though the outside of the wire does swoop out at a slightly wider angle than the inside of the wire, unlike Paige’s nice evenness. 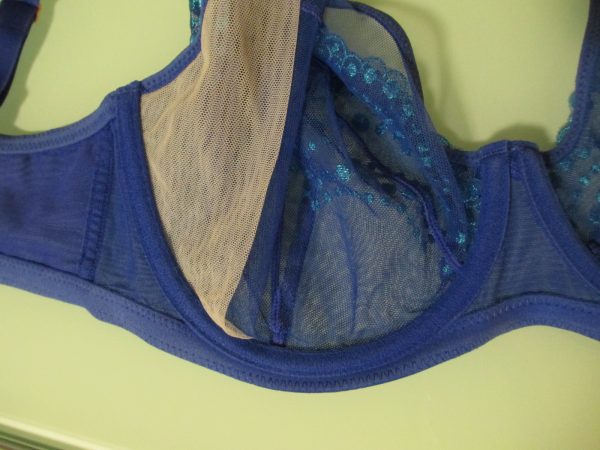 As for fit, well this thing could fit horribly and I would probably still keep it for the beauty alone, but it luckily fits quite nicely! It’s not as round as Paige, but not as pointy as, say, Freya’s bras. So it’s a nice, natural shape. It’s a little bit east-west, but the side sling helps ameliorate that issue.

I also really, really like the way it fits around my armpit. As you can see in the following image, there’s a bit of a sharp angle along the seam, so it completely clears my underarm and doesn’t rub against my armpit. Hallelujah! 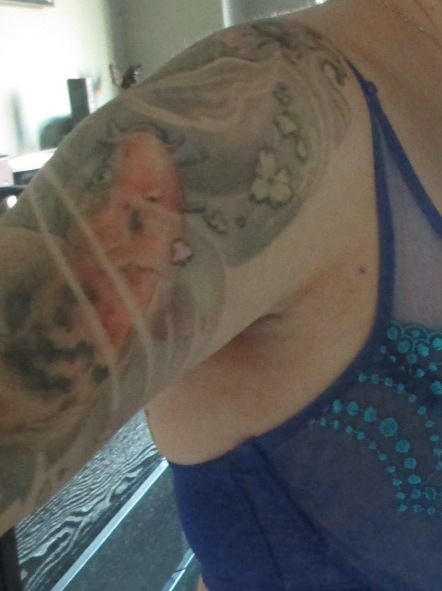 Further, I loooooove the tall, triangular swoop at the top of the cups. This is just a shape that I absolutely adore, yet it’s so rare among big-bust brands. I’m always on the lookout for straps that gradually blend into the cups instead of being tacked on in one little spot, and this definitely fits the bill. 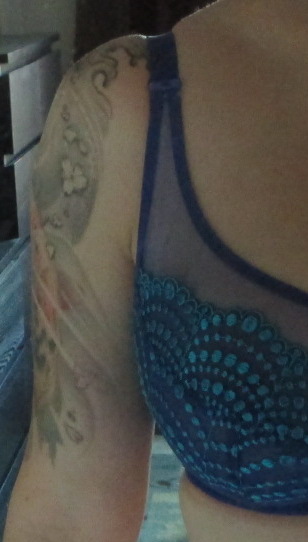 All the Lulu Tout bras are similarly lovely, go to a British H cup, and cost a mere $38. I think Figleaves has really done something truly special with this new house brand and I can’t wait to see what else they add in upcoming seasons.