So this is fun: Nicki Minaj is designing a clothing line for Kmart. I don’t listen to her music at all (in fact, I don’t think I could even name one of her songs), but I do enjoy her red carpet appearances. I love that she’s an extremely curvy lady who just wears what she likes. And since she has such wicked curves, I’m hoping her clothing line will accommodate curvy customers.

Earlier this week, photos were released of some of the garments on models, as well as images of Nicki herself wearing some of the items, and they make me feel optimistic. However, I also had high hopes for curvy actress Sofia Vergara’s Kmart line, but ended up feeling disappointed.

The models displaying Nicki’s clothes, though, look significantly curvier than the models in Sofia’s clothing. I don’t want to (illegally) steal the photo, so I’ll just link to the eonline.com article where you can find the image. I’m not totally thrilled with the skater dresses (so junior), but I love the prints and the leather-like bustier top (although that gore looks mighty wide).

Nicki also Instagrammed some photos of herself wearing the garments, and I’m definitely feeling this dress:

This outfit overall is totally crazy, but I could see wearing the leggings (high-waisted, no less! That means no lumpy pinched muffin tops) under a simple, solid tunic, or the top with a high-waisted pencil skirt: 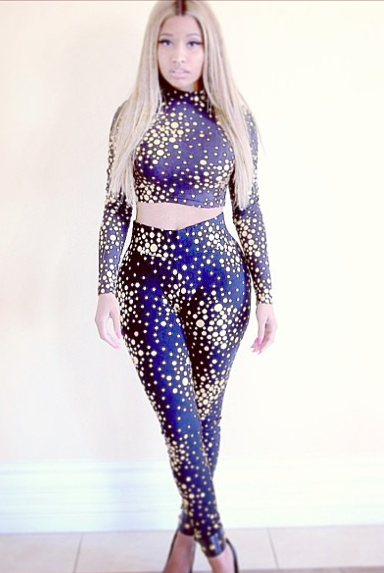 Overall, the designs look quite junior and a little crazy…but then, sometimes “a little crazy” is just the look I’m going for. Maybe I’ll pair some of these with my purple nerd glasses and metallic silver sneakers.

At the very least, I’ll be trying a bunch of these garments in-store when they’re released this fall and reporting back to Hourglassy.