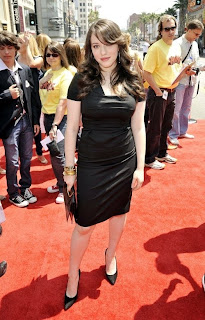 I found this while browsing Jezebel last night and really like this look (although is that ruching at her hips, or is it just too tight?) . In last Monday’s post, I said that Kat was “a new icon for how to look both smart and sexy”. I’ve been thinking about that statement. When you’re on the red carpet, smart and sexy is good. When you’re in the boardroom, sexy has a tendency to outweigh smart in peoples’ perception of you.

Actually, I think that’s the case no matter where you are, as proven by the “Norah’s Infinite Cleavage” posting on Film Experience. The second commenter wrote, “Oh. I’m so sorry you did that. Kat would be embarrassed by that, and she is so much more then [sic] her cleavage.” My impression is that someone who displays her cleavage like the asset that it is, is not going to be embarrassed by someone noticing its infiniteness. However, if someone has to assure the world that she is so much more than her cleavage, then sexy has definitely preempted smart.

So if we’re not going for “smart and sexy” in the boardroom, what are we going for? What two- or three-word combination would you choose to portray a smart full-breasted woman who isn’t denying her femininity but also isn’t allowing it to overshadow her other strengths?